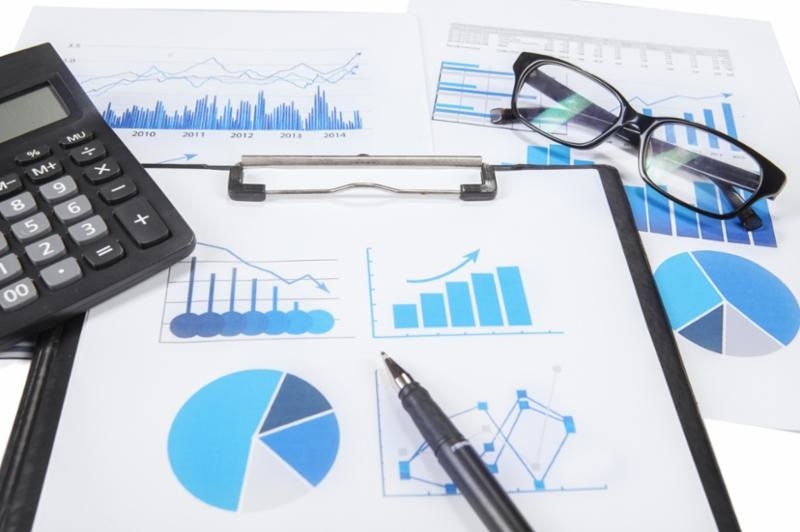 This is a special week as we have prepared our formal investment newsletter! This comes out quarterly and includes performance information on global markets, as well as our thoughts and viewpoints on what's going on. Over the years, we have seen a lot in the financial markets. We have seen the painful declines of the Great Recession. We have also seen one of the most dramatic and sustained recoveries in market history. All along, we have seen dramatic political events, natural disasters, and dire predictions.

As advisors, providing financial planning and wealth management to clients in Orange County, Irvine, Newport Beach, and around the country, we believe one of the most important tools we have is an examination of what we can control. We can't control who is elected or the laws they will pass. We can't control earthquakes, interest rates, tsunamis, or acts of terror. There are, however, many things we can control. Together, we can control your portfolio allocation and investment selections. We can control how we approach the balance of risk versus your goals, and we can control how we react to certain events and the media coverage of those events. In the end, those seemingly simple things can make a big difference. 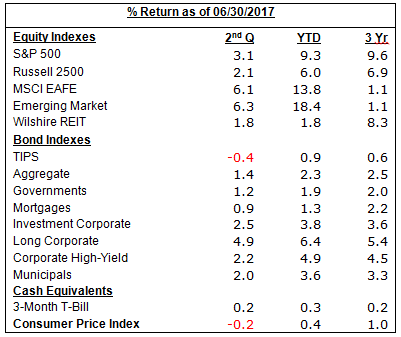 Global equity markets posted solid gains in the first half of 2017. The advance was also remarkably broad. Of the 30 largest global equity markets, 26 have posted gains this year. According to the Wall Street Journal, this represents the strongest and most consistent performance since the recovery from the Great Recession in 2009. U.S. equity markets also participated in the advance. The S&P 500 jumped to a 9.3% gain for the first half, representing the best start of a calendar year for the index since 2013.

Remarkably, these strong results were achieved despite continued political and economic uncertainty throughout the world, most notably in the U.S., Europe, and Brazil. Investing in equities is an investment in business. In the first quarter of 2017, earnings increased by double digits for companies in the U.S., Europe, and Asia. We believe it is best to use mathematical principles to build enduring portfolios rather than react to political events. Perhaps Albert Einstein put it best when he said, “Politics is for the present but an equation is for eternity.”

This is not to say we are out of the woods yet. Since 1871, U.S. equities have spent roughly 40% of all calendar years rising or falling over 20%. History tells us that a 10% market correction has occurred about once a year. While it is tempting to try to hop in and out of markets based on current events or jump on the latest trend, these strategies are fraught with risk. In a 2011 Gallup poll, 34% of Americans said that gold was the best long-term investment, while only 17% said stocks were best. Since then, on a cumulative basis, gold has dropped 30% while the S&P 500 shot up 145%. We’ll take the math over the latest trend.

Domestic Equities: U.S. stocks were supported both by earnings growth as well as by improved business and investor sentiment. This, coupled with the potential for tax reform and infrastructure spending, resulted in solid gains across the board. The S&P 500 rose 3.1% for the second quarter, bringing the 2017 return to 9.3%. Smaller company stocks, as represented by the Russell 2500, rose a more muted 2.1% for the quarter, but enjoyed a respectable 6.0% year-to-date return.

International Equities: International stocks have underperformed U.S. stocks for some time. Currency fluctuations, Greece’s issue, and Brexit had weighed on returns. By the end of 2016, many investors were ready to give up. We viewed it differently. One of the most powerful forces in mathematics and investing is called mean reversion. It simply means that in many cases, things will often revert to their long-term averages. So, an asset class that underperforms for a significant period can actually become more attractive, not less.

So far this year, international stocks are leading their U.S. counterparts by a large margin. Developed market international stocks rose 6.1% for the second quarter, and are up 13.8% for 2017. Emerging markets stocks – those from less-developed countries like China, Brazil, and India – turned in an even stronger return. The Emerging Market Index jumped 6.3% for the second quarter and is up an impressive 18.4% for the first six months of 2017.

Fixed-Income: Conventional wisdom has held that when central banks finally began to raise interest rates, it would trigger immediate and significant declines for bonds. In June, the Federal Reserve Open Market Committee raised the federal funds rate (which is actually the most recent of several since December 2015).  So far, the market response has been different than some expected. Despite multiple hikes, the bond market actually turned in respectable returns for 2017. The Barclay’s Aggregate Index – a measure of the total bond market – increased 1.4% for the latest quarter, and is up 2.3% for 2017. Other types of bonds also had positive returns. The Municipal Bond Index rose 2.0% for the quarter and is up 3.6% for the year. The Corporate High-Yield Index rose 2.2% for the second quarter and rose 4.9% for the year-to-date.

These bond returns offer a few insights. First, conventional wisdom, while widely accepted, is often not wise. Secondly, while it is important to be aware of the risks associated with a rising interest rate environment, entirely dismissing bonds as an asset class is not likely a good idea. Carefully constructing a risk-aware fixed-income portfolio that factors in the possibility of higher rates is likely the best course. We can help with that.

Over the years, we have seen a lot in the financial markets. We have seen the painful declines of the Great Recession. We have also seen one of the most dramatic and sustained recoveries in market history. All along, we have seen dramatic political events, terrorist acts, natural disasters, and dire predictions.

The months and years ahead will likely bring more challenges and opportunities. We will be here to help.

Source of data – – The Vanguard Group Inc., Morningstar, U.S. Department of Commerce, Wall Street Journal, St. Louis Federal Reserve, Bloomberg,  The Federal Reserve. Gallup Poll, August 11-14, 2011. The performance of an unmanaged index is not indicative of the performance of any particular investment.  It is not possible to invest directly in any index.  Past performance is no guarantee of future results.  This material represents an assessment of the market environment at a specific point in time and is not intended to be a forecast of future events, or a guarantee of future results. 3 year performance data is annualized. Bonds have fixed principal value and yield if held to maturity and the issuer does not enter into default. Bonds have inflation, credit, and interest rate risk. Treasury Inflation Protected Securities (TIPS) have principal values that grow with inflation if held to maturity. High-yield bonds (lower rated or junk bonds) experience higher volatility and increased credit risk when compared to other fixed-income investments.  REITs are subject to real estate risks associated with operating and leasing properties.  Additional risks include changes in economic conditions, interest rates, property values, and supply and demand, as well as possible environmental liabilities, zoning issues and natural disasters.  Stocks can have fluctuating principal and returns based on changing market conditions.  The prices of small company stocks generally are more volatile than those of large company stocks.  International investing involves special risks not found in domestic investing, including political and social differences and currency fluctuations due to economic decisions.  Investing in emerging markets can be riskier than investing in well-established foreign markets.