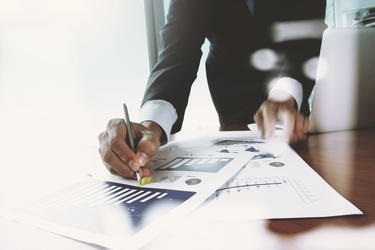 So far, 2017 has been a year of progress in the investment world against a backdrop of uncertainty and concern. While most asset classes continued to build on gains, unsettling global events generated headlines. Deplorable acts of violence occurred, both in the United States and abroad. Of course, we feel deeply saddened by the senseless loss of life no matter where it occurs.

North Korea continues to test missile technologies in defiance of global prohibitions. On the domestic front, political posturing and polarization seem to occur daily with continued partisan accusations and counterattacks. No matter what side one is on, it gets pretty annoying after a while. We occasionally hear some say they are tired of it all and don’t know how to invest in this environment. We understand.

Noted investor, Warren Buffett was recently asked why he had been largely silent about political issues. He said that during his lifetime he had lived under 15 Presidents, purchasing equities under 14 of the 15. The one President he had not bought stocks under was Herbert Hoover. He quickly added that it was because, at the time, he was only two years old. Apparently, Mr. Buffett needed a few more years to learn to read and acquire some investment capital. Then, he was good to go.

Like Mr. Buffett, we know we have a job to do. We have to manage capital capably in all environments. Perhaps Theodore Roosevelt, whose administration was well before Mr. Buffett was born, said it best. “Do what you can, with what you have, where you are.” 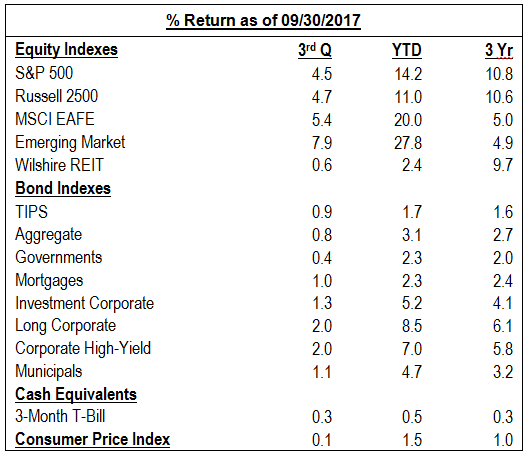 Domestic Equities: Despite all of the drama around the North Korean missile testing and the ever-present political wrangling, U.S. stocks continued their upward march. This was likely due to the prospect of corporate and individual tax cuts. We view equities as the opportunity to own part of a business. After years of sluggish growth lingering from the financial crisis, it is hoped that tax reform can bring a needed jolt to the economy, permitting businesses to increase earnings and employment.

International Equities: After years of under-performing U.S. stocks, international equities are closing the gap. This should not come as a surprise. From a valuation standpoint, foreign equities were valued at a lower price-to-earnings ratio and higher yield than their U.S. counterparts. Stocks in developed markets rose 5.4% for the third quarter. For 2017, the index has jumped 20%. The story for emerging markets stocks was largely the same. After a considerable period of lagging the U.S. markets, some wondered why they owned the once popular emerging markets stocks at all, but 2017 provided the answer. The Emerging Markets Index advanced 7.9% for the third quarter, and surged 27.8% for calendar year 2017.

Fixed-Income: Since the days of the financial crisis when the government pushed bond yields to historic lows, some have been calling for a dramatic rise in yields. For now, this has not happened. Despite multiple rate increases and a strong stock market, the bond market has taken it all in stride. The Barclays Aggregate, a measure of the total domestic bond market, eked out a 0.8% increase for the quarter. For the year, it notched a 3.1% gain. High-yield bonds also had positive results. These bonds, from low quality issuers, have greater default risk but are generally less affected by rising rates. As the economy strengthened, the High-Yield Index rose, and is up 2.0% for the quarter and 7.0% year-to-date.

As we enter the final quarter of 2017, it is important not only to look forward but to look back. During the third quarter of 2017, the financial markets marked something of an anniversary. There was no celebration. Not many people even noticed. Ten years ago, on August 9th, 2007, a French bank announced it had frozen access to $2.2 billion in sub-prime hedge funds. Those hedge funds turned out to be the canary in the coal mine. That day marked the beginning of what would be the most far-reaching financial disruption since World War II. It would affect everyone from homeowners in the U.S. to pensioners in Iceland and just about everyone in between.

We mention this not because we expect an imminent repeat of that global crisis. The point is that by following prudent, disciplined, and mathematically-informed principles, investors can survive even the worst of financial times and flourish in the years that follow.

We have been through a lot over the past 10 years. Including difficult declines and roaring rallies. In the years ahead, we will likely encounter more of each. Echoing Roosevelt’s thoughts, we will be there doing all we can, with everything we have, where we are. That is our continuing commitment to you.

Call us if there is anything you would like to discuss. We are always here to help.

Copyright 2017 Odyssey Wealth Design. The content of this material was provided to you by Lincoln Financial Network for its representatives and their clients. Lincoln Financial Network is the marketing name for Lincoln Financial Advisors Corp. and Lincoln Financial Securities Corporation. Source of data – Morningstar, Wall Street Journal, Bloomberg, Reuters, Dow Jones Newswires, BNP Paribas, U.S. Department of Commerce, The Federal Reserve. Theodore Roosevelt’s quote taken from the Autobiography of Theodore Roosevelt (1913). Warren Buffet’s quote taken from CNBC (8/30/17). The performance of an unmanaged index is not indicative of the performance of any particular investment. It is not possible to invest directly in any index. Past performance is no guarantee of future results. This material represents an assessment of the market environment at a specific point in time and is not intended to be a forecast of future events, or a guarantee of future results. Three-year performance data is annualized. Bonds have fixed principal value and yield if held to maturity and the issuer does not enter into default. Bonds have inflation, credit, and interest rate risk. Treasury Inflation Protected Securities (TIPS) have principal values that grow with inflation if held to maturity. High-yield bonds (lower rated or junk bonds) experience higher volatility and increased credit risk when compared to other fixed-income investments. REITs are subject to real estate risks associated with operating and leasing properties. Additional risks include changes in economic conditions, interest rates, property values, and supply and demand, as well as possible environmental liabilities, zoning issues and natural disasters. Stocks can have fluctuating principal and returns based on changing market conditions. The prices of small company stocks generally are more volatile than those of large company stocks. International investing involves special risks not found in domestic investing, including political and social differences and currency fluctuations due to economic decisions. Investing in emerging markets can be riskier than investing in well-established foreign markets. CRN-1916661-1000617