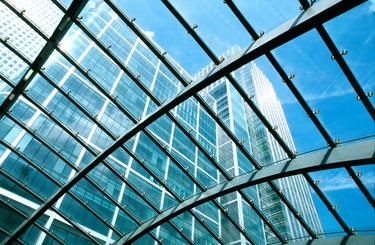 2018 began with great optimism. After the strong gains of 2017, stocks continued their climb at a torrid pace. During January, fueled by expectations of strong earnings and the prospect of corporate tax cuts, stocks added to 2017’s gains, racing to an 8.2% advance.

Of course, anyone who studies markets knows that equity prices are volatile and can be subject to sudden reversals. What appear to be calm waters can turn choppy without warning. That is just what occurred in late January. A litany of financial concerns, albeit some already known, began to weigh on markets. As the Fed Open Market Committee drew near, some wondered if higher rates might disrupt the economic expansion. What began as political posturing around trade was quickly interpreted as a looming trade war.

In just a few days, the gains of January were gone. On February 5th, markets were subject to considerable volatility.

The media breathlessly proclaimed that it was the “biggest drop in history.” This, while technically correct, required a monumental twisting of the truth. The media took the largest point spread of the day and applied it on a point basis not a percentage basis. The “biggest drop in history” claim ignored that the DJIA was roughly at 2,000 some 30 years ago, as opposed to the roughly 24,000 level of today. Applying the correct mathematics, the drop was the worst drop in 30 months and the 99th worst in history. While correct math doesn’t sell newspapers or commercials, it does help in managing money and expectations properly. As we have often said, financial decisions are best made with the television turned off.

History has shown that a 10% correction has occurred about every 12 months over the past 100 years. So, why does this decline feel more severe to many people? Noted Princeton professor of mathematics and psychology and Nobel Laureate, Dr. Daniel Kahneman, explained this phenomenon in his ground-breaking work. It is because people, particularly when they are under stress, tend to make investment decisions not by mathematical likelihood, but by their most- recent experiences. The DJIA rose or fell by 1% on only 10 trading days in 2017. That was the lowest number since 1964. The long-term average annual number of +/-1% days is 49. So, it is possible that the volatility of 2018, while significant, is not as uncommon as it may seem. It has more to do with last year being uncommonly calm and thereby affecting our perceptions about volatility.

This is not to say we ignore market movements and their effect on our clients; far from it. We just take it to another level. One of the principles we use is mathematical inversion; a scientific principle that has been around since the 1800s. Inversion applies the concept that when 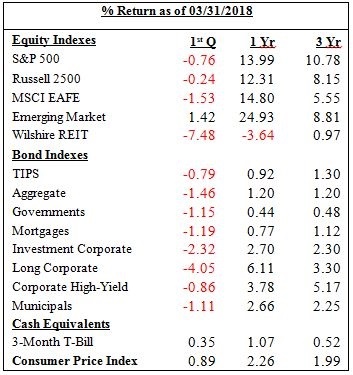 confronted with a difficult problem you start at the desired result and work backward. This principle, while not widely known outside of mathematics, has been used by investment professionals like Warren Buffett and Charlie Munger for decades. Instead of looking at short-term market movements, we look at our clients and their goals and then work backward to their portfolios. By focusing on the important part of the equation rather than the short-term erratic part, the outcomes are more likely to be much more informed, predictable and of lasting value.

Domestic Equity: Ultimately, after weighing all the news, both good and bad, the markets ended largely where they started. U.S. stocks ended with little change in the first quarter. The S&P 500 edged down less than 1%. On the brighter side, in the trailing one year, the index still returned 14%. U.S. small stocks ended about the same; down less than one quarter of 1%. Smaller stocks ended the trailing year up 13%.

International Equities: Foreign stocks took a similar course. Following a strong 2017, stocks surged in January. As talk of higher interest rates and trade conflicts rose, international stocks gave up their gains. The MSCI EAFE Index edged down 1.5% for the quarter. Emerging stocks, despite being at the heart of some of the trade disputes, managed a modest gain. The Emerging Markets Index rose 1.4% for the quarter and is up 25% for the trailing year.

Fixed-Income: As the economy has continued to stabilize, the Fed continued to slowly ratchet up rates. Since 2017, the Fed funds rate has increased four times including the most-recent increase in March. So far, the bond markets have taken the return to “normal” rates in stride. The Aggregate Bond Index, a measure of the total bond market, moved down a modest 1.5% for the quarter. For the trailing year, despite multiple hikes, the index rose 1.2%.

Regardless of the fear many feel around rising rates, they can be positive. More normal rates can signal that the economy is adding jobs through continued economic growth, benefiting millions. Also, savers and investors will finally have the opportunity for greater income in the future. Of course, with rising rates, investors should be as selective and prudent as ever. We can help with that.

The return of volatility and a more traditional interest rate environment are not the only challenges and opportunities of 2018. There will be many. Change is a dominant theme in business, politics and investing. Due to advancing technology, the future will look different than our parents could ever have imagined. To make the most of that future through investing takes some effort. It will require both urgency and patience, new vision and time-tested principles. Using these things to help prudently build your future is a job we take seriously.

Please let us know if you need anything. We are here to help.

Source of data – Morningstar, Wall Street Journal, Bloomberg, Reuters, Dow Jones Newswires, American Funds, MSCI, S&P Index, The Federal Reserve. The performance of an unmanaged index is not indicative of the performance of any particular investment. It is not possible to invest directly in any index. Past performance is no guarantee of future results. This material represents an assessment of the market environment at a specific point in time and is not intended to be a forecast of future events, or a guarantee of future results. Three-year performance data is annualized. Bonds have fixed principal value and yield if held to maturity and the issuer does not enter into default. Bonds have inflation, credit, and interest rate risk. Treasury Inflation Protected Securities (TIPS) have principal values that grow with inflation if held to maturity. High-yield bonds (lower rated or junk bonds) experience higher volatility and increased credit risk when compared to other fixed-income investments. REITs are subject to real estate risks associated with operating and leasing properties. Additional risks include changes in economic conditions, interest rates, property values, and supply and demand, as well as possible environmental liabilities, zoning issues and natural disasters. Stocks can have fluctuating principal and returns based on changing market conditions. The prices of small company stocks generally are more volatile than those of large company stocks. International investing involves special risks not found in domestic investing, including political and social differences and currency fluctuations due to economic decisions. Investing in emerging markets can be riskier than investing in well-established foreign markets. CRN-2081088-040618